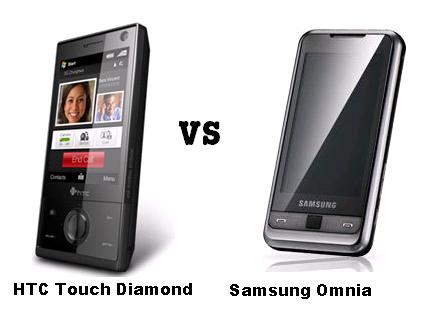 As the hype from the 3G iPhone rests a little, the spotlight has now been trained on two “iPhone killers” these past two weeks – the Samsung Omnia and HTC’s Touch Diamond, which went on sale lately.

The Omnia, which went on shelves last weekend, costs almost identical to the Touch, about $500 to $600 with a no-frills two-year plan (check prices at singtelshop.com, m1shop.com.sg, and starhub.com).

If you add that $100 incentive voucher from, say StarHub Hubbing, or M1 loyalty vouchers, and throw in a trade-in phone for $200, that’s a brand new full-featured phone for under $300. Good deal!

So, how do the two stack up? Early looks suggest:

Round 1: UI
Winner: A tie. Both have touch-sensitive screens. Samsung have haptics, which means you know when you press on a button on-screen. HTC, meanwhile has its prettier TouchFlo 3D, which really wows the socks off people.

Round 2: Looks
Winner: HTC, for a really pocketable size, and the better-looking finish. Samsung’s not bad too, but it looks too much like an iPhone.

Round 3: Specs
Winner: Samsung, for having handy GPS (and the superior Agis maps), and a whopping 16GB of memory. That’s enough for my 13GB – and growing – bunch of MP3s! If the HTC has more than its 4GB of memory built in, it might just tip the scales in its favour.

Round 4: Screen
Winner: It’s a tie again. I really prefer the sharpness of HTC’s excellent VGA screen. For old geeks, you’ll remember that VGA (640×480 pixels) is the resolution we used to have on our old 14-inch CRT monitors. Now we have it on a small screen, that’s why it’s super fine! Why is it a tie then? Simply because the Samsung screen is bigger – it makes pictures and particularly 16×9 videos much more watchable.

Early verdict: It’s tie, but it’s not because I don’t want to stick my neck out. I thought I was sold on the HTC Touch Diamond, after I got less-than-enthusiastic with the Samsung demo at CommunicAsia. But today, over lunch, the Samsung folks passed some of us in the media retail sets of the Omnia, and they seemed to zip along a little faster on the UI, making me think about that 16GB onboard again.

If you have to buy one of these phones this weekend, here’s my suggestion: Get the HTC if you use it more as a phone and less as a multimedia powerhouse (coz it is more pocketable for the weekend and not everyone needs 16GB of memory). Get the Omnia if you want all-out multimedia on the go (if you like everything in one gizmo).

Otherwise, look out for the review in Digital Life next Tuesday. No, it’s not a smart ploy to get you to read ST, but simply because I haven’t fully reviewed the phones yet to form a better verdict!

By Alfred Siew
Follow:
Alfred is a writer, speaker and media instructor who has covered the telecom, media and technology scene for more than 20 years. Previously the technology correspondent for The Straits Times, he now edits the Techgoondu.com blog and runs his own technology and media consultancy.
Previous Article Please port my number to pfingo
Next Article Back up yer vinyl records
4 Comments