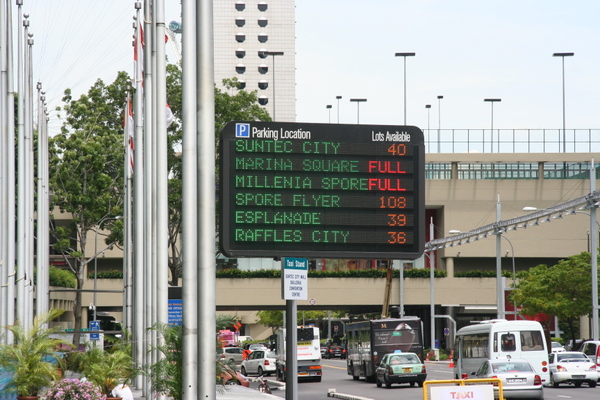 The jam started from as far back as SCGS along Bukit Timah Road and by the time I hit Nicoll Highway at 2pm yesterday, loads of cars were queuing up to turn left into Suntec and Marina area.

I decided to make a U-turn and head for Shaw Centre, my “secret” car park with plenty of lots whenever I wanted to avoid the crazy car park queues at Suntec, Millenia and Marina.

To my horror, the car park at Shaw was full and I had no choice but to make another run – this time to Raffles City. Phew, there were still 40 or so lots left although they were filling up quickly as well. Above is the car park sign board just outside Suntec City at about 2.15pm yesterday as I was going to Comex. 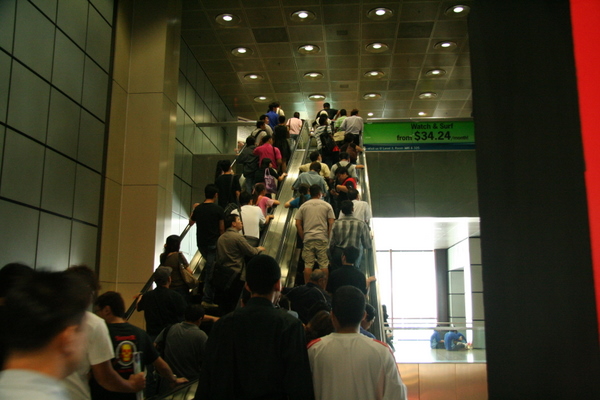 Check out the peeps getting up the escalator on level 1. 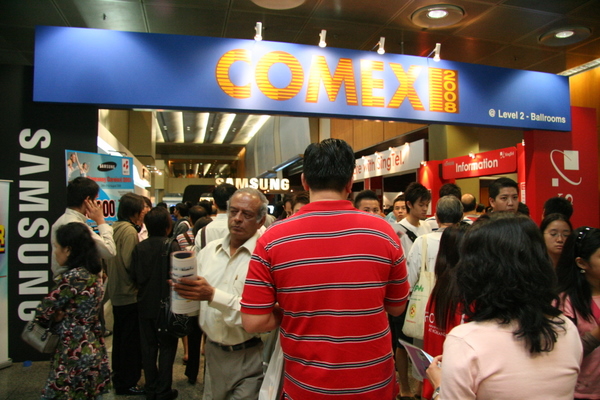 The entrance to level 2 of Comex. The entire ballroom and function rooms at level 2 were occupied by SingTel and Samsung. SingTel was out for the kill and appears to have the best freebies of the three telcos at Comex.

The red camp was throwing in a free Acer Aspire One (the Windows version) mini laptop for anyone signing up for its 8 Mbps plan at S$55 per month with a 2-year contract and a Lenovo G230 for those going for a 30-month S$79.95 per month 10Mbps deal.

SIngTel also put up attractive posters of Prison Break, Grey’s Anatomy and other hit US TV series which will soon be available on its new Season Pass video-on-demand channels which offer the episodes just 24 hours after they are screened in the US.

To give customers a taste of the channels, SingTel threw in free mio TV installation, set-top box and one free Season Pass title for all who subscribed to a broadband package.

SingTel also slashed its mobile broadband 3G/3.5G rates by half with a 1 Mbps plan costing only S$11.21 per month (I think it’s the cheapest now) if you sign-up for a year’s contract. Note however, that SingTel still offers the 50GB cap and not unlimited use like StarHub and M1. 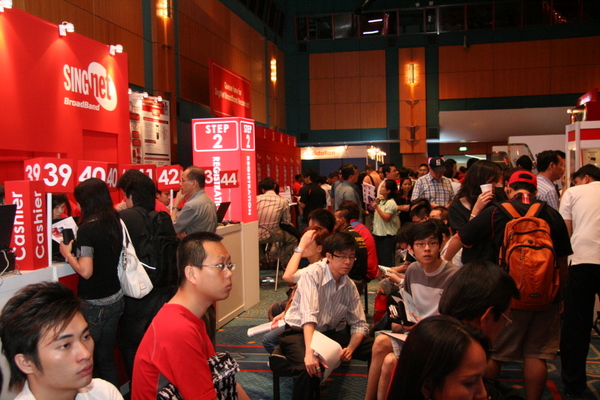 Here’s the pix of the crowd waiting for their Q numbers to be called at the SingTel broadband booth. The SIngTel area was the most crowded of the three telcos and at 2-3pm, there was a sizeable crowd which I had to weave my way through. 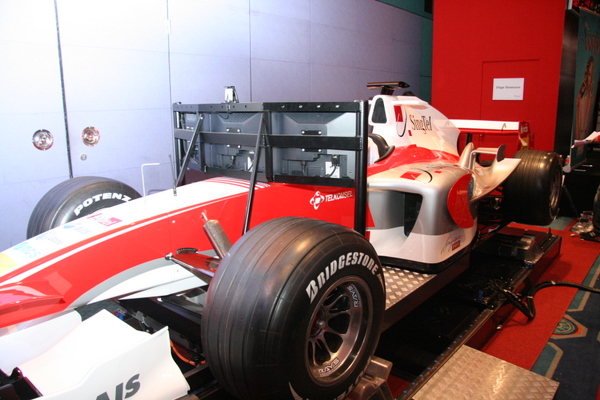 SingTel brought in the cavalry too, with the showcase of its F1 race car, but nobody seemed keen and was too busy sussing out the deals.

Just outside SIngTel’s show area was an even bigger one occupied by Samsung who was peddling everything they had in full force – TVs, monitors, printers, MP3 players and even washing machines. 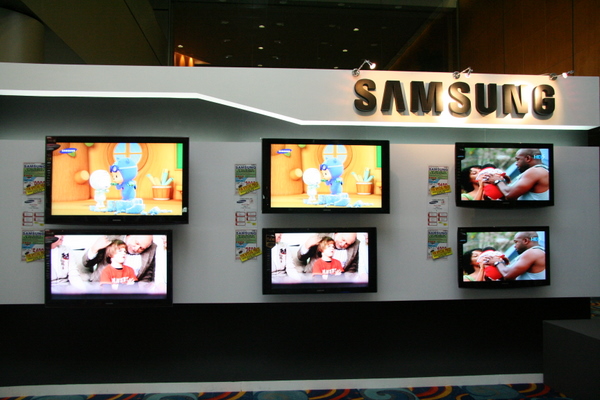 The TV wall featured Samsung series 4, 5 and 6 TVs together. What is interesting is Samsung did not display the same content for its series 4 (HD-Ready) units (the ones on the far right column) compared to the Full HD series 5 and 6 units (middle and left columns respectively).

It was showing HD5 on th series 4 panels and a looping collection of pre-recorded HD footage – which includes games, documentaries and movies – on the series 5 and 6.

This made the series 5 and 6 look a lot better compared to the HD5 footage which was showing at standard def anyway at that time. You really cannot tell the difference between HD-Ready and Full HD at anything less than 46-inch and only barely at 46-inch. So save your money.

Level 3 was StarHub and Sony. StarHub looked like it occupied a lot more exhibition space than SIngTel, but the crowds were definitely smaller at green camp. I wasn’t complaining though since I don’t like squuezing through warm bodies filled with perspiration. 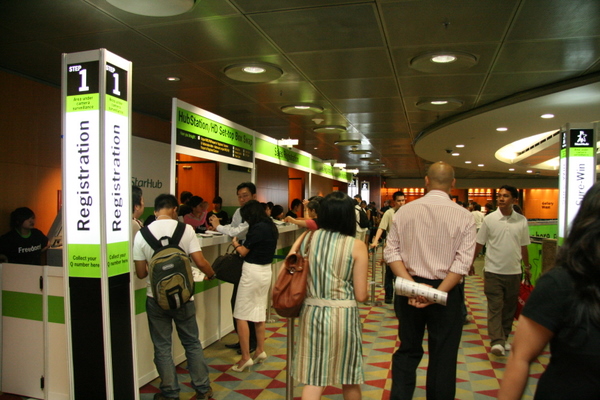 Here’s the registration booth at StarHub – definitely less people compared to the red camp. But maybe it was because it was already pass 3pm and the lunch crowd had gone back to work.

StarHub did not have free laptops to offer and its best premium is probably the Samsung flash memory camcorder VP-MX10A for its S$59.92 per month 8Mbps broadband line which includes a 1Mbps mobile broadband package as well.

StarHub’s strategy appears to be going for bundled deals instead of using its traditional end-of-year fabulous premiums strategy (I own two free HP laptops from SCV contracts). StarHub’s strategy hasn’t really changed in that sense, but SingTel has become a lot more aggressive in courting new customers by throwing in good premiums for sign-ups in the middle of the year.

The problem with this system is that if the show has already started, you have to wait for the next screening, although StarHub tries to resolve this issue by having multiple channels of the same show running simultaneously.

The reason StarHub could not offer VOD in the past is because of what I suspect is the limitation of cable broadcast technology. And the reason why StarHub can now offer real VOD is because, well, it’s using the Internet to deliver VOD.

How do I know this? Well I found out that my StarHub HD set top box cannot get the new StarHub  VOD channels and I had to switch to the Hubstation box (which is only standard definition) to get VOD. The Hubstation box is specifically needed (the normal digital cable SD box wont do too) because it has a built-in cable modem which can therefore stream the VOD channels.

The HD box does not have a built-in modem so if you are a pure StarHub cable TV subscriber you have to choose between HD channels and the new VOD channels.

However, you can plug-in an external cable modem to the HD set-top box but you need to have a separate StarHub broadband subscription for this.

For me, since I am a “triple hubber” with mobile, broadband and TV under StarHub, this is not a real problem but if only want cable TV, you are stuck.

SingTel’s mioTV, in comparison, also needs a modem and a set-top box to get the channels but SingTel does not require that you must have a separate broadband subscription. Of course this anomaly can be solved when StarHUb launches a HD Hubstation box.

Sony was also out in full force on level 3 with everything from TVs to VAIO laptops to camcorders.