Visiting the big IT fairs today is very different from the experience 2-3 years ago. The last few tech shows (we have four every year, one every quarter, in Singapore which coincides with the school holidays) has become a lot more complicated and a lot more competitive.

That was the case with one Acer booth where there were like Challenger, Harvey Norman and three other retailers all selling Acer laptops at the same booth. They all wore the same uniform, booths looked identical and sold the same packages and deals for the “official” deals listed on the brochure but each also had their own special deals (which is usually not on the brochure).

Dell was also very interesting. There were two huge Dell kiosks at level 4. The second Dell kiosk claimed that it was the real Dell while the other chap was a reseller but when I asked if I could downgrade the Intel Extreme processor to a normal one for the M1730 gaming laptop, they said I could only upgrade and not downgrade.

With so many different representing the same vendors, its simply good news for consumers. It’s no longer the case of simply comparing the same class of product, say like a 22-inch monitor, against different brands but also checking out the different booths selling the same brand to see if you can get a better deal. Trust me, it can still go lower than the “official” price on the brochure. 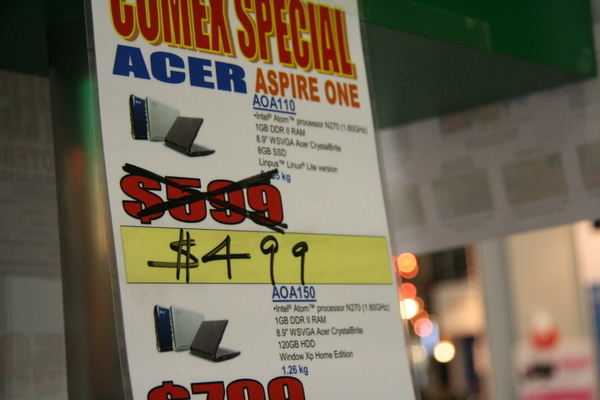 There’s a reason why the vendors have placards with space beneath the “list price” – they are meant to be SLASHED!!! 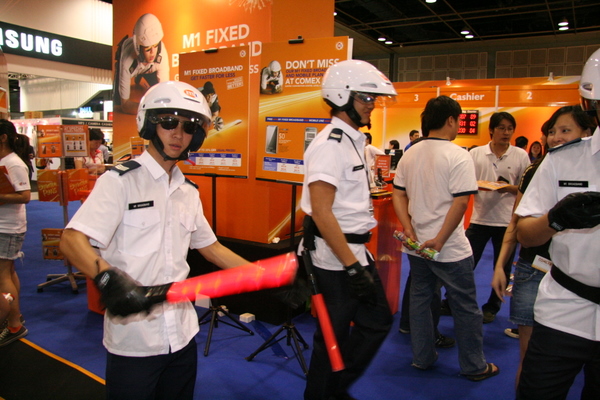 I caught these “cops” swinging light sabres at the M1 booth. Not sure what they were doing but this guy merrily posed for the cam.

The knowledge of salesmen at the show were generally skin deep and Intel definitely needs to spend a lot more marketing dollars to tell people why they should consider the new Centrino 2 laptops over the original Centrinos.

One salesgirl (I think it was from one of the big electronics superstores) gave me a blank look when I asked if she had any Centrino 2 laptops. Another peddling Asus laptops pointed out, erroneously,  that the laptops with the Intel Core 2 Duo processors were the Centrino 2s.

Even for those who correctly pointed out their Centrino 2 laptops, some claimed their models were launched in January (not possible since they just came out last month), some could not explain why Centrino 2 was better and nobody mentioned the fact Centrino 2 had two Wi-Fi radios built in so you could use the less congested 5GHz networks as well as mass market 2.4GHz. So please don’t just swallow wholesale what they tell you, you have to do your own research first. 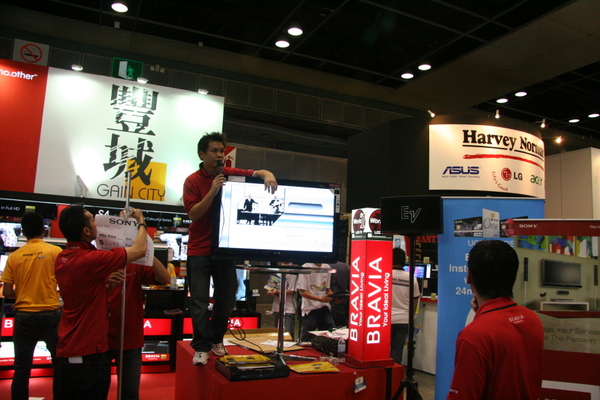 Some retailers also employed interesting tactics like one-hour specials, five sets only specials, and more. This chap from the Gain City booth for instance suddenly took the stand and shouted his five-sets-only special of a Sony S-series 40-inch Full HD TV going for S$2,199, which was S$100 cheaper than the last time I checked at the other Sony booth on level 2.

The good TV deals seem to be a Audio House where they are peddling a 46-inch Full HD set for S$1,999 but I was not too impressed with the picture quality – it seemed rather grainy. But Audio House is smart, it placed a better 46-inch TV (going for S$2,399) the last time I checked with less noise and better picture quality.

A 37-inch HD-ready set also Sharp was going for as low as S$999. If you are looking for a TV this show, the Sharp ones at Audio House’s booth are the ones to beat. Based on my assessment, the TVs can go lower and as at day one yesterday, they were still too high. TV is still the hottest item, so keep checking for the good deals.