Yebber is a Singapore-based website that aggregates reviews by end users and provides a mechanism for users to search for them.

So far, pretty standard. The catch? It pays you to have an opinion.

How does it work? You create an account, hammer out a review, and it pays you Yebber dollars, which can be exchanged for gifts or hard cash.

Started in March 2007, Yebber is the brainchild of Stewart Lau, CEO and owner of the site. What’s interesting is that Stewart is no wet-behind-the-ears youngster out to do his first start-up. The 52-year old veteran businessman has been running his own company, Integrated Software Engineering, for 21 years. Yebber is just one of the many products – ERP software, e-commerce platforms, and surveillance camera software are other examples – that his company has churned out over that period of time.

Stewart started Yebber “not because there’s a big potential in making money now”, but because he wanted a space in which people could throw bouquets and brickbats at vendors in the market.

This idea was born from his own personal experience. In his business past, there were some really scummy deals that he could not find an avenue to warn other customers about, so he built his own platform.

The Yebber dollar was an interesting evolution in this process. In the beginning, it was about giving a few prizes to the best reviews to incentivize people to write, but the Yebber team soon stumbled upon the concept that it’s fairer and more effective to reward all participants. The monthly rates are set by a formula dependent on advertising revenue and the reviews. Yebber dollars are also paid out for photos and videos submitted, and also for checking out reviews – an interesting concept and experiment that is still unfolding.

Besides the Singapore market, Yebber is also trying to branch out into the Malaysia and Indonesia market, and they’re looking for partners in other parts of the world to localize Yebber for their countries.

“Only the people in their home countries understand their needs and culture,” Stewart said. Yebber is also looking to partner with more Singaporean businesses, like this current promotion with the National Heritage Board (NHB).

As an end user, I find Yebber an interesting concept: it crowdsources opinions and pays them with advertising dollars.

Similar to growing a wiki, I feel that it needs to get a sizeable base, have strong moderation and publicity (all of which is hard work!) before it can take off. The content is a little raw, but it’s worth a look. 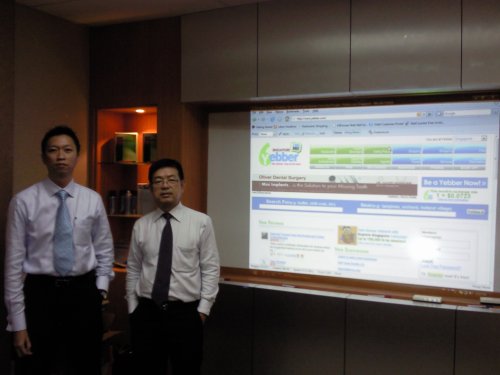 (Note: This post is part of the research for a spread of stories in Digital Life on the web innovation scene in Singapore. There will be a different slice of news in there, including how the companies are coping with the downturn.)