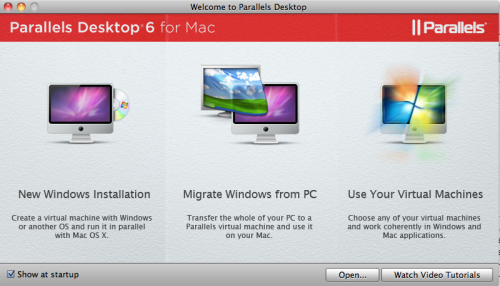 Just bought a Mac but miss your old Windows PC’s functionalities? Want to run good old Microsoft Office but don’t want to fork out cash for a new version for the Mac?

Both scenarios my wife and I faced when we recently bought an iMac as a desktop computer to complement the Windows laptops we had at home. My wife loved the iMac’s clean design but had to get used to the Mac OS’ look and feel – plus a lot of her old programs had to be replaced by Mac versions.

I had heard of Parallels’ virtual machine software before, but after several years of leaving the Mac platform, I had not kept up with virtual desktop applications until now. Thus when I installed Parallels Desktop 6 (PD6) a few weeks ago, I was pretty surprised by how far such “bridging” software have come in helping users enjoy the best of both Mac and Windows worlds.

Sure, you can still use the Mac’s Bootcamp feature to fire up a separate copy of Windows. But that means you have to choose one or the other whenever you boot up your Mac.

With PD6, Windows runs “on top” of the Mac OS and can appear as either a window on the desktop (like an OS within an OS), or integrated to look like part of the Mac OS (in PD6 Coherence mode). The latter is what impresses – it means your Windows programs run as if they are Mac programs and you don’t really have to worry about whether they are running on Mac OS or Windows.

A Windows 7 app folder is installed on your dock and you can launch any Windows program straight from the Mac interface. In no time, you’ll be surprised how Solitaire on Windows can really sit next to your Mac OS’ graphics programs on your desktop in harmony.

I tried out some common Windows programs like Office 2010 for Windows and they run very well. To be honest, I’ve never been a fan of Mac Office – the number of bugs that are in there are just irritating, to say the least. One example is the Spellcheck error popup that often triggers when I open a document not created in MS Word 11. It forces me to turn off Spellcheck to work on a document. 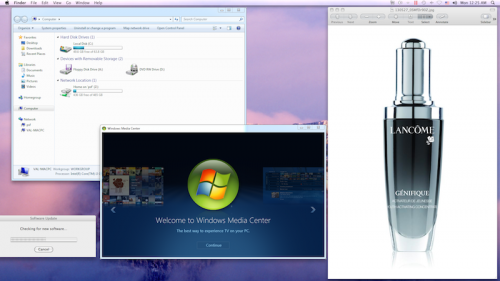 With PD6 and a Windows 7 install, I get to run Office 2010 for Windows, which works like a charm. I’m not sure if this is Apple or Microsoft’s bug, but at least with what PD6 + Windows 7 offers, I get to choose a less buggy version of Office.

Installation of the PD6 software, I’d like to point out, is really easy. Pop in the installation CD and simply follow the instructions to set up. In a matter of minutes, you’ll be prompted to install a Windows virtual machine. Here, you get to choose if you want to transfer all your data from a previous Windows machine over, making migration less painful for newbies to the Mac.

You’ll soon be prompted to slot in your Windows installation disc. In my case, I installed Windows 7 without a glitch. This wasn’t the fastest install, to be honest – the modest Core i3 chip on the iMac perhaps makes things noticeably slower than on most PCs – but there were no issues in the end. The good thing is, there is almost no lag when running this copy of Windows on the Mac. Bear in mind again that this was a modest Core i3 machine, albeit with 8GB RAM (you should have more RAM even though Parallels recommends just 2GB for Windows Vista or Windows 7).

Whether in full-screen mode, window mode (at a low 800 x 600 resolution) or Coherence mode, regular programs like Internet Explorer run without a glitch. I’d like to have tried out games on the iMac, but to be fair, it’s not a gaming machine with its Core i3 chip and AMD HD4670 graphics chip. Here’s a list of playable games that other gamers have tested.

On the whole, I’m pretty impressed with PD6. In the old days, when you talk about the beige LC II “pizza box” Macs or the later G3/G4 notebooks, you had no choice to go the Mac way or the highway. Many programs you were used to on Windows did not work and you often had to somehow find a Mac alternative.

Some years back, I was issued a Titanium G4 Powerbook that had to be booted into OS 9 (though it came with the then-new OS X), because my company ran Lotus Notes and the Mac version could only be run (unstably) on OS9. I wish there were something as stable as PD6 then to let me have a Windows version instead of the buggy Mac version of Notes, which caused endless headaches.

Thankfully, things have changed. Today’s “bridging” software like PD6 means you can have what you like on the Mac (in my wife’s case, the iMac’s simple design) and what you like on the PC (the wealth of programs out there, as well as the familiar Windows interface). As I said earlier, it offers the best of both worlds, and to my surprise, seamlessly as well.

If you’re a first-time Mac buyer, PD6 should be on your wishlist for a purchase-with-purchase discount at the store. It’d help smoothen out the unfamiliarity of moving to a Mac, as well as provide some tasks that perform better on Windows, like Office compatibility.

The only bad thing, I’d like to remind everyone, however, is that you’d have to keep both your Windows and Mac OSes up to date!

By Alfred Siew
Follow:
Alfred is a writer, speaker and media instructor who has covered the telecom, media and technology scene for more than 20 years. Previously the technology correspondent for The Straits Times, he now edits the Techgoondu.com blog and runs his own technology and media consultancy.
Previous Article Google wants to help you find what you love
Next Article