What if we could predict the future?

TIBCO’s CEO Vivek Ranadivé believes that we can.

Speaking at TUCON 2011, which is the annual customer event that software infrastructure player TIBCO runs every year in Las Vegas, Vivek explained that the key to crystal-ball gazing was access to the right information.

“The right information at the right time is worth more than all the information in the world,” he said during his keynote this week.

He called this the “two-second advantage”, which also happens to be the title of his new book (co-authored with journalist Kevin Maney) that was just published a few weeks ago.

In his book, the two-second advantage refers to the flash of insight that talented people use to guide their decisions.

Rooted in intuition rather than analyzing mounds of data, talented people can predict things before they occur. For example, a great musician can hear notes before they are played, and a great chef can predict a dish’s taste from reading the recipe.

In part this predictive insight is due to winning the genetic lottery, but it is also be synthesized through hard-won experience. This insight allows them to react faster than everybody else.

Vivek believes that this two-second advantage can be learnt, and even applied to a business organization. To him, it is about getting the right information at the right time in the right place with the right context. 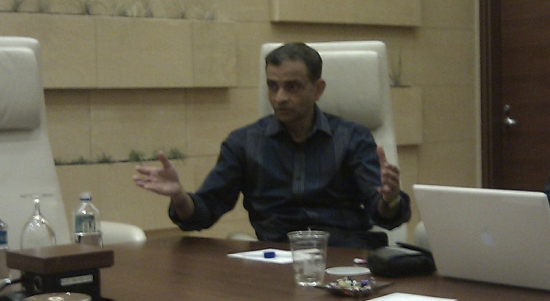 Speed and smarts in the enterprise

So what are the key technologies to unlocking this?

TIBCO believes that big data analytics (right information), real-time event messaging (right time), mobility (right place) and social media (right context) are pieces of the puzzle that unlock the two-second advantage. And cloud too, but this didn’t really fit into the above TUCON 2011 marketing tagline.

The story is that TIBCO has been working hard to embed these technologies within their enterprise software stack, and thus they can help their customers become speedier and smarter – exactly the two-second advantage.

TIBCO’s strength and legacy is in real-time event messaging and bus architectures, which they believe position them very well for the future.

Vivek believes that for now, 99 percent of the world is using transaction-based architectures, but ten years down the road, 99 percent won’t be – they’ll be event, or rule-based.

“The world will move away from a transactional database-centric architecture to an in-memory event-driven one,” he said.

He gave an example of what an event-driven world would look like. Let’s say you are buying shoes online at an e-commerce retailer and you have completed almost all your choices save clicking “submit” on your shopping cart credit bill. Feeling a pang of guilt at splurging so much, you decide at the last moment not to buy said shoes.

Now, in a transactional world, the data wasn’t submitted to the database on the backend, so end of story. In an event driven world, the website would be smart enough to detect that you are navigating away from the site after having shown interest (thus firing off an event), and a window would pop-up and offer you a discount.

In-memory computing provides the speed to do business intelligence in real-time, which are pieces of the two-second advantage that TIBCO also has in its software stack (Active Spaces for in-memory computing and Spotfire for analytics).

“If you look at the most progressive companies in the world — Amazon, Google, Facebook – their companies are not run on traditional databases,” said Vivek, making a dig at Oracle and Microsoft. “Oh, they do use databases to store transactions, but they run their business in-memory.”

Superfast in-memory analytics is not limited to TIBCO, of course. This area was trailblazed by business intelligence toolmaker QlikTech, but has caught on with big software enterprise players. For example, SAP made a big splash in the news with HANA (High-Performance Analytic Appliance), which they just launched just last week.

As for the rest of TIBCO’s key trends, I’ve already touched on their Silver cloud offering, which was just launched at the TUCON 2011 show. For mobility, TIBCO has a bunch of messaging solutions they’ve created for the telecommunications sector. More interesting to me is Tibbr, their enterprise social media foray, which I will probably touch on in another post.

Will their two-second advantage vision bring TIBCO, which has one billion in revenue (estimates by them for this year), to loftier heights? They certainly seem to be doing well, as their last 3rd quarter records have shown.

I’d leave you with this bold proclamation by Vivek as TIBCO jostles with enterprise software heavyweight competitors like IBM, Oracle and SAP.

“We’ll be one of the biggest software players in 10 years,” he said.

By signing up, you agree to our Terms of Use and acknowledge the data practices in our Privacy Policy. You may unsubscribe at any time.
Chan Chi-Loong September 30, 2011
Share this Article
Facebook Twitter Copy Link Print
Share
Previous Article Sony’s Tablet S sells from S$668 in Singapore, available in October
Next Article Sony Ericsson takes aim at sports and music fans with Xperia Active, Live with Walkman
1 Comment