Yet another wearable gadget is hitting the shelves in Singapore, with the Misfit Shine activity monitor going on sale here this week for S$169.90.

Launched by former Apple and PepsiCo chief executive John Sculley here on Tuesday, it is different from the typical tracker through its unique pebble shape, which can be worn with a clasp, a sport band watch strap or necklace.

The aim, as you’d expect from a company founded by a former Apple head honcho, is to be simple and elegant.

From what I saw at the launch, I can say the Shine is certainly something one can wear either with their sports gear or their party best. It looks good without appearing like a sports junkie accessory or worse, something that comes out of a bad science fiction show.

Interestingly, there are no obvious buttons or touch screens to use with the device. The Shine uses Bluetooth technology to communicate with a Shine app to set the time, determine the activity goals and track your progress using its three-axis accelerometer.

You could also set the type of the activity you would want to track, such as walking, swimming, cycling, running or even sleeping. The tracker can save up to 30 days of data and uses the typical button cell batteries used by watches.

The good thing going for the Shine is its cool way of knowing your daily progress and time.  Just double tap on it and it will tell you how far you are from reaching your daily activity goals.

It also tells the time by using small LED lights along the circumference of the Shine that resemble a typical watch face. It looks unique and it looks cool.

What’s the down side? For now, the Shine can be supported by Apple devices, though Android users will have their own app by January 2014.

Want to know how well it works? Check out Stuff Singapore’s in-depth look at the Misfit Shine here.

By Wilson Wong
Follow:
Wilson is a self-taught photographer whose passion started with his father’s old Canon L Rangefinder camera. He now leads the 1,500+ strong Singapore Photography Interest Network group and his photos have won acclaim from Nikon and Fujifilm, as well as featured in various books and exhibitions.
Previous Article Fewer Wireless@SG hotspots, so what?
Next Article 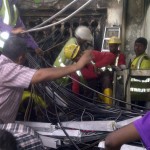