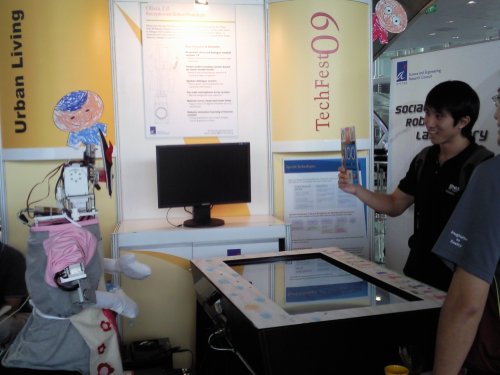 Singapore does do interesting infotech R&D. But it doesn’t get the publicity it deserves, which is such a waste.

Take for example the recent Techfest ’09, which was held at Fusionpolis last week from October 8th to 9th. Techfest, which A*Star I2R (Institute of Infocomm Research) started in 2005, is an open-to-public exhibition showcase of emerging technology research in Singapore. A*Star, for those of our readers who are not familiar with the brand, is a government institution dedicated to charting Singapore’s science and technology future.

Now A*Star has interesting research projects that make for great tech stories, but Techfest ’09 was a bland colourless event. It’s open to the public, but most of the attendees were government folks, and it felt as if many exhibitors — all A*Star folks — were there more because they were “arrowed” into showcasing their work instead of wanting to show off their work to a good audience.

It could have been so much more. For example, Unconference, which is a similar technology showcase type of event, had far more passion and buzz. Unconference effectively engaged student volunteers and social media, and put together great content in their lectures. The sad thing is that Unconference is run by a bunch of young Singapore entrepreneurs, whereas I’m sure A*Star has more budget and clout as part of Singapore Inc.

But I digress from my main point, which is that many of the research projects that A*Star does is quite interesting. It’s a pity, because these are stories that can capture the public’s imagination.

From talking robot butlers to using brainwaves to move objects (no, this is not science fiction but actually true!), there were quite a few projects that piqued the interest of a science geek like myself.

For example, at the brain-computer interface (BCI) research booth, attendees were invited to strap three diodes (attached with a sticky pad) to their foreheads. By concentrating hard, they could get a radio controlled toy car to move and hit a ball. BCI is done by measuring changes in brain waves, and although finely tuned control is difficult, it was definitely a fun experience to use psychic “thought power” to get objects to move.

On a more serious note, BCI can be used to help kids with ADHD (Attention Deficit Hyperactivity Disorder) to concentrate for short spurts and effectively measure progress. It can also be used in the healthcare field for people with physical disability or brain impairments, and trials have been underway with local hospitals for the last two years, according to Dr Fabien Lotte, one of the research fellows I talked to at the BCI booth. 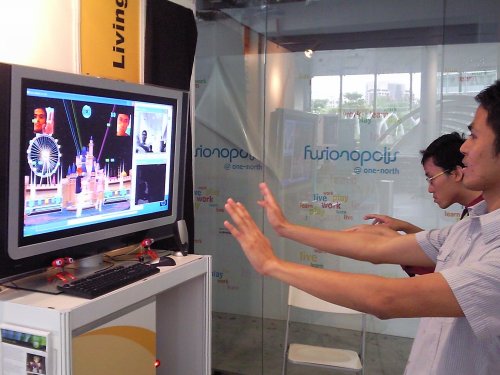 There were lots of other interesting booths that showcased intriguing technology ideas. Green sensor networks that were solely powered by ambient energy sources like heat and light, a Gesture Software Development Kit (SDK) that allows developers to use hand gestures for applications like games and interactive advertising, and an all-in-one RF (Radio Frequency) tuner that can distinguish between white noise and signal for any wireless frequency (e.g. Wi-Fi, 3G, commercial radio) are just some examples.

There is raw potential in many of the research projects. Some will even translate into great products like iTwin(an A*Star product), which was showcased at Unconference and at the recent Silicon Valley TechCrunch50 startup conference.

This is the kind of publicity our homegrown R&D needs. I’m sorry, but events like TechFest aren’t good enough.

By signing up, you agree to our Terms of Use and acknowledge the data practices in our Privacy Policy. You may unsubscribe at any time.
Chan Chi-Loong October 11, 2009
Share this Article
Facebook Twitter Whatsapp Whatsapp LinkedIn Copy Link Print
Share
Previous Article S$23 a month to watch EPL from next year
Next Article Ellison and McNealy to kick off Openworld confab
2 Comments