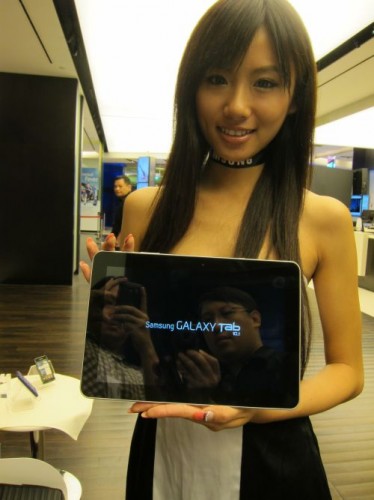 After seeing Apple launch its ultra-thin iPad 2, the Korean firm went back to the drawing board by designing an even slimmer version of an already attractive Galaxy Tab 10.1 tablet (original hands on here).

The result: a tablet that is, hands-down, the one to get. From a quick hands-on today at a Samsung launch event in Singapore, I can say that the super-light frame (560g for the Wi-Fi model, 565g for 3G model) is definitely a lot more handier than many other Android tablets of the same size.

The slim case somehow manages to pack in a generous 7,000mAh battery, which will surely come in handy when you are firing up the screen all day with Angry Birds, or well, working on your e-mail.

I believe the Tab 10.1 will ship with Android 3.1, which means it will come with the latest version of the Honeycomb build made for tablets. The Android experience is way superior to Apple’s icon-driven iOS, which while offering a nice zippy touch and feel, is looking increasingly dated, limited and closed.

Want to drag and drop files onto an Android tablet? Simply hook up via USB and transfer your songs, movies and Excel files over. Forget about iTunes. Want to simply download free apps? No, you don’t have to hand Apple your credit card details once you fire up your tablet.

And being a true “post-PC” device, Android gizmos like the Tab 10.1 don’t have to sync with your PC at all if you choose not to. All I have to do is log in with my Google password, and my e-mail, contacts, schedule and apps are all ready to be accessed (apps still have to be installed). 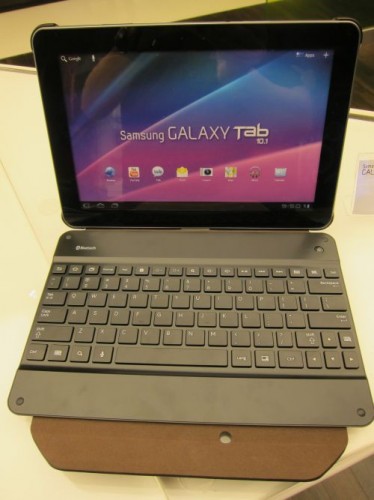 And Android 3.0 is so much more. The true multi-tasking lets you switch between apps without any of the limitations that Apple presents. A game can run in the background, along with several other apps, without losing any data or slowing things down.

The new interface is also a lot better than the Android 2.2 I use now with my older 7-inch Galaxy Tab, which Samsung says today will continue to be on sale. When e-mail comes in, a small indicator alerts you at the bottom of the screen, instead of the drag-down menu for the smaller-screen version.

Gmail, for one, is a stellar offering. It is as full-featured as what you get on a PC and you get all your mail labels as well as useful previews on a widget on the front page.

The browser too, is way more souped up and very, very fast. Try loading a “heavy” website like Techgoondu, for example, with all the embedded Flash-based videos and things are smooth as butter. No need for Flash, you say? But why choose? Just use it when you need it.

And what about apps? The gap between Apple and Google is closing day by day. There’s no need to choose an “HD” version of Angry Birds and a regular one. Android Market automatically detects that you are using a tablet and lets you download the right version. And you know what, Angry Birds is free on Android still. 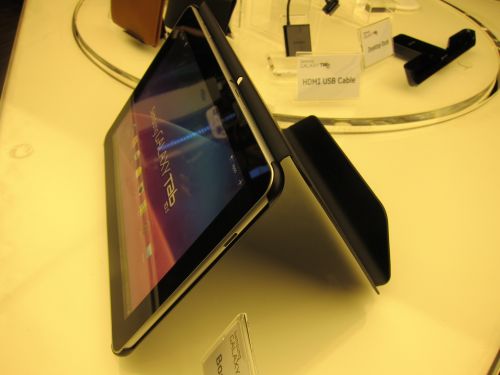 With an 1GHz dual-core processor, just like most Android tablets now, the Tab 10.1 is smooth when going through all these tasks.

And one more thing – it supports downloads of up to 21Mbps with HSPA+, so where available, over-the-air downloads are going to be pretty fast.

If there’s one thing I will knock Samsung for, it’s that the Tab 10.1 has no memory card slot. To be fair, of course, the tablet is so slim, there’s probably no space for that. Another thing is the fact that it looks a little like an iPad. That’s not a bad thing altogether, because the iPad 2 is a well-made device, but there will be Apple fanboys calling it a copycat.

Not that it matters to me, of course. This is one tablet I can recommend heartily. That brings me to the biggest grouse – it’s only here in July!

Thanks everyone for the entries for the second iPad giveaway. We are consolidating the entries now and deciding on a winner this week. Stay tuned!

By Alfred Siew
Follow:
Alfred is a writer, speaker and media instructor who has covered the telecom, media and technology scene for more than 20 years. Previously the technology correspondent for The Straits Times, he now edits the Techgoondu.com blog and runs his own technology and media consultancy.
Previous Article Microsoft unveils Surface 2.0 – a US$8,600 touch-screen “table”
Next Article Playstation Network fully back in some regions by week’s end
13 Comments