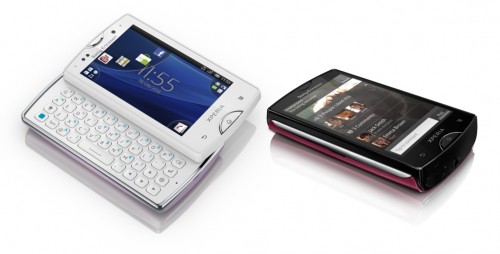 These tiny phones make up the budget-friendly end of the price spectrum and complement the earlier flagship phones. Surprisingly, the new doodads pack quite a punch and are worth considering when purchasing your next phone.

As cellphone makers try to pack more cores into your smartphone, it is just a matter of time before 1GHz mobile chips find their way into cheaper smartphones.

In fact, the two Sony Ericsson minis now sport 1GHz processors and are powered by Android 2.3 Gingerbread. The company has also included the Reality Display with its signature Mobile BRAVIA Engine in the tiny three-inch (320 x 420 pixels) screen.

Both phones offer access to the Android Market. In addition, you can also pin up to 16 apps on the phone’s corners in a way that’s similar to the iPhone’s app folders. A unique feature dubbed Facebook inside Xperia embeds social connections in phone functions such as the picture gallery, music player, phone book and calendar.

Sony Ericsson says Facebook inside Xperia will come to all 2011 Xperia phones through a software update in the second quarter of this year (that’s pretty soon). This probably means older phones are out of luck.

So what’s different between the “pro” and the “not-pro”? The Xperia mini is capable of taking 720p videos – the world’s smallest phone capable of such a feat – while the mini pro has a slide-out landscape physical keyboard and comes with a front-facing camera. Sony Ericsson also baked McAfee antivirus and an office suite into the mini pro, although you won’t be doing your eyes any favours if you try to compose a document on that teeny screen.

Both phones will land in Q3 this year, and pricing is as yet unknown. Are you looking forward to these beefed up minis? Let us know in the comments!