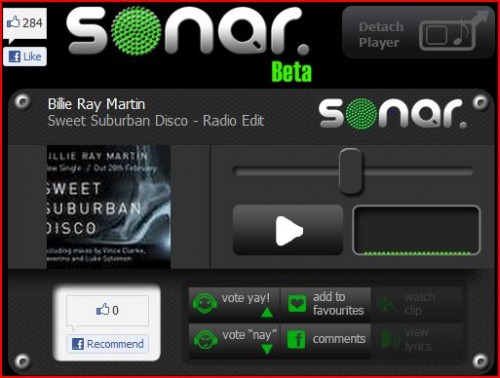 Tired of listening to radio like it’s just background music? Here’s a mobile app that turns your phone into a true interactive radio device.

Launched last week, this made-in-Singapore app called Sonar lets you see what song is playing (why should we pay for an expensive SMS to find out?), scroll though the lyrics and also vote for your favourite tracks to push it up an online chart.

Love a song? Say “yay”. If not, click on “nay” (wish Facebook had that function!). There’s also deep integration with Facebook, so that you can share your comments on what’s on air, via your phone or tablet.

X’Ho and Vendetta are the deejays on air most times and the good thing is, for now, radio ads or boring news segments don’t interrupt the music much, unlike on traditional radio.

The app is heavily marketed by Samsung and runs without a glitch on the Galaxy S and Galaxy Tab (and is expected to run well on its bada-powered phones as well). It also does well on my old Google Nexus S, bringing smoothly-streamed live radio on the go.

By Alfred Siew
Follow:
Alfred is a writer, speaker and media instructor who has covered the telecom, media and technology scene for more than 20 years. Previously the technology correspondent for The Straits Times, he now edits the Techgoondu.com blog and runs his own technology and media consultancy.
Previous Article Industry leaders to discuss LTE/4G, mobile cloud and next-gen OSes at UNWIRED 2011
Next Article Dell Venue arrives in Singapore through StarHub and M1
Leave a comment