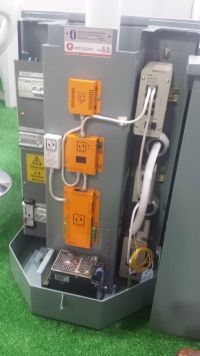 An IDA AG box providing power and connectivity to nearby sensors

The Infocomm Development Authority (IDA) today talked up a grand vision to turn Singapore into a “smart nation”, one where sensors everywhere could pick up traffic congestion, predict how long taxis will take to come and even detect pollution in the air.

It’s not a new idea. Indeed, many government agencies have already been adding “smarts” to their existing hardware, like cameras, over the past few years. Yet, IDA’s effort is laudable in many ways.

It wants to centralise the effort and get both public and private organisations to share the infrastructure and connect to a common interface. This can jumpstart many new services.

One way is to provide what it calls Above Ground (AG) boxes that tap on the power near lamp posts on the street and fibre cables underground to connect up various sensors in the vicinity.

These boxes are essentially like network chassis, each hooking up to 1,000 nearby sensors via power over Ethernet. In a trial in Jurong in July, three boxes will be rolled out, with 100 more planned possibly next by year.

The IDA is also working on an operating system – it doesn’t want to say what but bets are that it’s based on Unix – that will let agencies and companies plug in via simple API (application protocol interface) calls.

So far, so good. If all goes to plan, the IDA would have created a very easy way to connect up cameras, smell sensors and other hardware that government agencies or companies can use for a wide variety of uses.

The police can analyse images for any suspicious activity, for starters. These sensors can also detect potential floods when rain falls heavily, for the environment agency.

The big issue, however, is in the details, or lack thereof. Facing reporters this morning at this year’s CommunicAsia trade show, IDA executives were clearest on one thing – this was a work in progress and a lot of things were not yet fixed.

How much would the eventual rollout cost? IDA may not even have the budget approved yet for a nationwide deployment, thus this current proof of concept to push its point.

How will security and privacy issues be addressed? Again, IDA is looking for more rounds of consultations with the industry and the public.

Notably, the government is exempt from tougher data protection rules recently enacted. How will it safeguard users’ information, for example, if it captures an image of people on a street?

To be fair, this is a vastly different project from what the IDA had carried out previously. Unlike the nationwide broadband network it set out to build 10 years ago, this time the task is not as simple as building the highway and hoping that users will come.

It has to get buy-in from users, starting from the government agencies that it hopes to empower and help cut costs for.

One big obstacle is security. Homeland security and police forces will be rightly wary about sharing their data on the same hardware and network used by private companies.

Just last year, the Ministry of Home Affairs and the Economic Development Board worked with various consortia to roll out a similar project for urban surveillance in several parts of Singapore. That ran on its own hardware and network.

While IDA’s new smart nation pitch might be interesting, these security agencies will have worries about having their most sensitive data flowing through what is essentially a public network. They also won’t want too many people knowing where its networks are, to prevent vandalism.

Another question is resilience and redundancy. What happens if one of the many roadworks in Singapore knocks out a fibre link to an important AG box or node in sensor network?

Will a repeat of the SingTel exchange fire last year suddenly blind the eyes and ears of government agencies relying on these on-the-ground sensors to make critical decisions?

The answer comes back to cost. Does this mean the government has to pay more to fibre operator OpenNet to buy a second, parallel link? Might it be better to build a separate network for the most important stuff then?

All these questions don’t mean that a common, nationwide network cannot be built for efficiency. They just point to how difficult such an endeavour can be.

Not many years ago, the idea that a bank can store its customer information in the same data centre used by thousands of other websites would raise red flags for security-minded folks in the industry.

That same worry is keeping many companies away from using cloud computing today. But yet so many others are putting their faith in shared networks, as long as the data that is travelling through is secure.

For them, the Internet, where so many important transactions go through, is no longer the strange, dangerous place it once was about 15 years ago.

Perhaps that should give an idea of the time and effort needed for such an ambitious smart nation project to mature into something that everyone trusts, from governments to users. Singapore is starting early, which is a good thing. It just has to expect issues that have no ready answer.

By Alfred Siew
Follow:
Alfred is a writer, speaker and media instructor who has covered the telecom, media and technology scene for more than 20 years. Previously the technology correspondent for The Straits Times, he now edits the Techgoondu.com blog and runs his own technology and media consultancy.
Previous Article SingTel’s Easy Mobile plans let users customise airtime, SMSes and data
Next Article Hands on: Huawei Ascend P7 at CommunicAsia 2014
Leave a comment